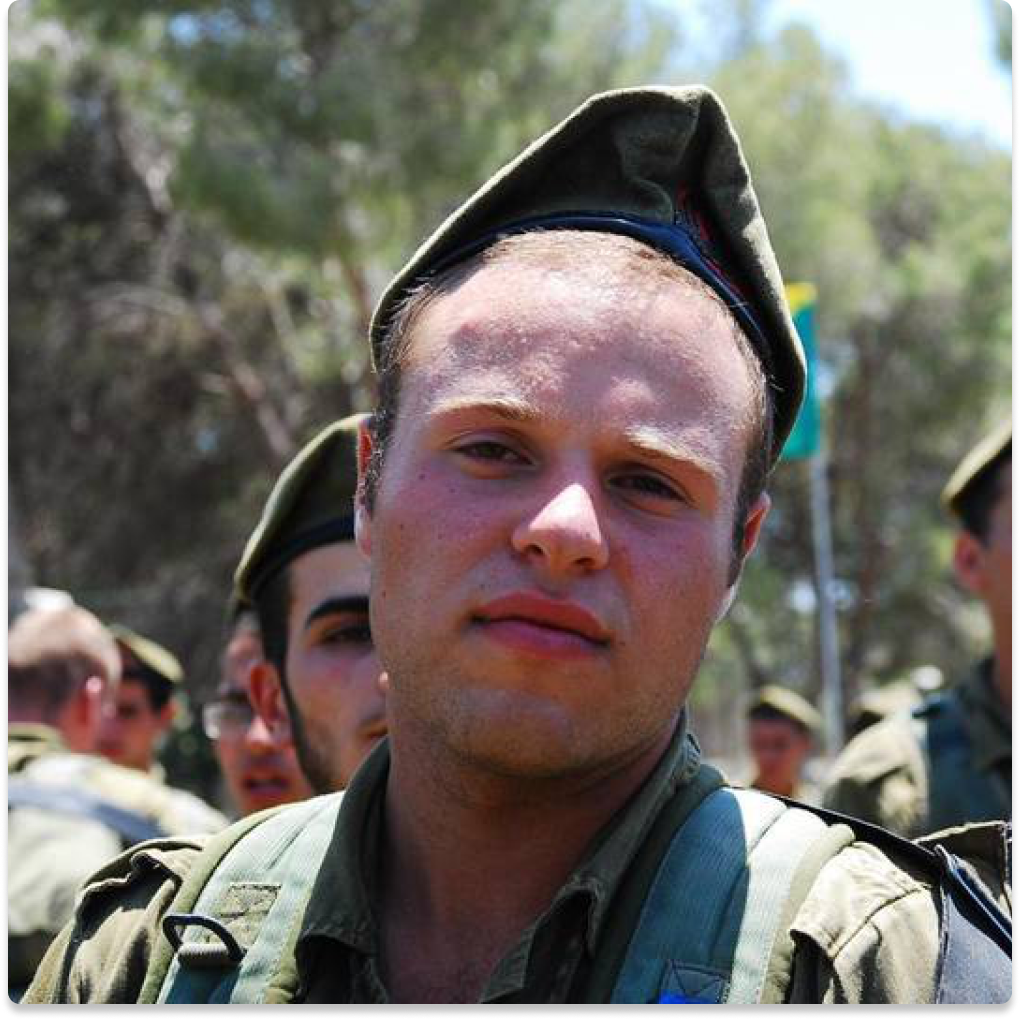 Jordan Low prepared for the likes of the U.S Naval Academy and West Point, ready to take the path of a military college followed by a career as an officer in the U.S. military. However, this would ultimately end up not being his calling. He chose to join the Israeli military, where he felt he could make a more significant contribution. Jordan became a sharpshooter in Israel's prestigious Golani Brigade, where he served for three years and deployed for tours in Lebanon and Gaza.

In the summer of 2014, his unit engaged in Operation Protective Edge. During this summer war, Israel fought the Hamas in Gaza with the mission of locating and destroying tunnels that the Hamas had built from Gaza into civilian areas in Israel. Hamas operatives have infiltrated Israeli civilian communities numerous times, committing unspeakable acts of violence. During this operation, a Hamas anti-tank missile hit a building occupied by Jordan’s squadron. The building went up in flames, but he was able to guide his team to safety. However, while helping his squad escape, he suffered severe smoke inhalation from the missile's strike. Jordan was the last person to leave the building and was immediately evacuated. His injury resulted in a 6-week stay in ICU and an additional 10.5 months of recovery after his release. Following his rehabilitation, he returned to service to finish his contract, despite attempts by IDF to give him an early honorable discharge.

After his service, Jordan enrolled at the world-renowned Hebrew University of Jerusalem, where he began his Bachelor of Arts in International Relations. Despite being early in his school career, he recognized two things by 2018. Firstly, Jordan wanted to start a business in the defense industry, and secondly, he wanted to work with his family. It was then that Jordan and his father decided to start a business together. They named the nascent company ‘First Breach’. In Hebrew, the name of Jordan’s unit in Golani, Unit 51, translates to "The First Breachers." Golani is known for being on the front lines and breaching enemy lines or compounds ahead of other units. It was then, in 2018, that the company was born from those deep-rooted foundations.

Mr. Jeffrey Low has been our Founder and CEO since inception. Mr. Jeffrey Low is an entrepreneur who has developed, owned and operated numerous outpatient ambulatory imaging and surgical centers in multiple states for the past 25 years.

Mr. CJ Dugan has been our Senior VP of Business Development since May 2022. Mr. Dugan has also served as an Executive of Maxim Defense Industries, LLC since July of 2018 where he built an International, Government, Military, and Law Enforcement team that secured many contracts throughout Europe, Australia, and the US. Prior to his time as Maxim Defense Industries, LLC, Mr. Dugan served as a consultant for Gemtech, L3 and Smith and Wesson for US Government Contracts. Previously, Mr. Dugan served as the Noncommissioned Officer in Charge of the United States Army Special Forces Command Force Modernization Cell where he managed 14 NCOs and a total of a $2.9B portfolio. During his distinguished 20-year career in the U.S. Army, Mr. Dugan earned numerous awards, including: Global War on Terrorism Medal, Global War on Terrorism Expeditionary Medal, Iraq Campaign Medal, National Defense Service Medal, Army Accommodation Medal, Joint Service Commendation Medal, Meritorious Service Medal, Purple Heart, and Bronze Star Medal.

Mr. Keith "CUPPA" Evans has been our VP of Sales and Marketing since 2020. Mr. Evans has 30 years of retail and corporate sales and marketing experience. During his career, Mr. Evans was the Head of Midwest Sales and Marketing Operations for brands such as The Rockport Co., Clarks of England, and Samuel Hubbard Shoe Co. Mr. Evans successfully produced year-over-year growth as department lead at each footwear company. Mr. Evans received his BS in Communications Advertising and Public Relations from Emerson College in Boston.

Mr. Michael Fuentes has been a Lead Supervisor for us since March 2022. Over the past 20 years, Mr. Fuentes has gained valuable expertise in manufacturing/production, development and design of proprietary production equipment, quality assurance, industrial safety, and all aspects of industrial maintenance. Mr. Fuentes’ experience includes the superalloys, plastics, rubber, and renewable energies sectors. Mr. Fuentes has worked for or in conjunction with Micheline, Siemens, Siemens Gamesa, Caledonian Alloys, and AEP industries. Mr. Fuentes received his BA in Project Management from Arizona State University.

Mr. Joel Pagliaro joined First Breach having previously led the Financial Division of Hagerstown, MD based Pet Food and Supplies e-commerce retail organization, Hearty Pet Inc. Prior to his time at Hearty Pet, Mr. Pagliaro spent his accounting career working in both private and public accounting. Mr. Pagliaro also excelled during his time working in Minor League Baseball with the Hagerstown Suns, where he earned the South Atlantic League Sales Executive of the Year in 2009. Mr. Pagliaro is a native of Beacon, NY and now resides in Waynesboro, PA, where he holds the elected position as Inspector of Elections for his precinct.